Coffee rust is a disease that attacks the most economically important coffee trees in the world. Since the 1980s, occasional outbreaks of this fungus have harmed coffee production in the Americas, sometimes doubling or tripling its price. And the problem has been getting worse since 2008, requiring huge investments of resources to combat it.

A new discovery raises an intriguing possibility about controlling the most expensive disease that affects coffee trees and is packaged in a small shell. According to recent research at the University of Michigan at Ann Arbor, garden snails of the Bradybaena similaris species can consume large amounts of coffee rust before the disease can harm the plant. Just put a snail on a leaf covered with rust and it can snatch 30% of the fungus in 24 hours.

Although coffee rust has known predators and pathogens, gastropods - snails and slugs - were never among them. There is also little evidence of slugs that eat other types of phytopathogenic fungi. Furthermore, this appears to be the first record of a change in the diet of garden snails from plants to fungi.

However, this possible biological control, a pest management tactic with the use of other organisms, has an obstacle: garden snails are usually invaders and also pests in several plantations. But the researchers may have found a way to keep the snails' diet focused on coffee rust.

Zachary Hajian-Forooshani, a doctoral student at the University of Michigan, and his advisors John Vandermeer and Ivette Perfecto, were conducting field research in the green central mountains of Puerto Rico in 2016, when they saw thin trails of live orange snail excrement clinging to the part bottom of the broad, green leaves of the coffee trees. The coloring of the excrement matched the coffee rust perfectly.

Curious, the researchers collected samples of the garden snails and the native Caribbean snail of the species Bulimulus guadalupensis, which frequently divided the leaves of the coffee tree. The group left each snail species isolated overnight with leaves containing coffee rust in a controlled laboratory environment. After 24 hours, only the garden snails had eliminated the coffee leaf rust.

The following year, the group returned to the same coffee plantation to carry out further experiments. This time, when collecting the snails, they noticed a great abundance of Lecanicillium lecanii, a fungal parasite and a known enemy of rust. The coexistence made them question whether garden snails consumed both fungal rust and its pathogen, which is a well-known mycoparasite.

In the following image, a normal leaf of coffee contaminated with the rust fungus next to a leaf that apparently had the orange rust spores eliminated by the snails. You can see an orange trail of snail droppings on the left edge of the leaf on the right. 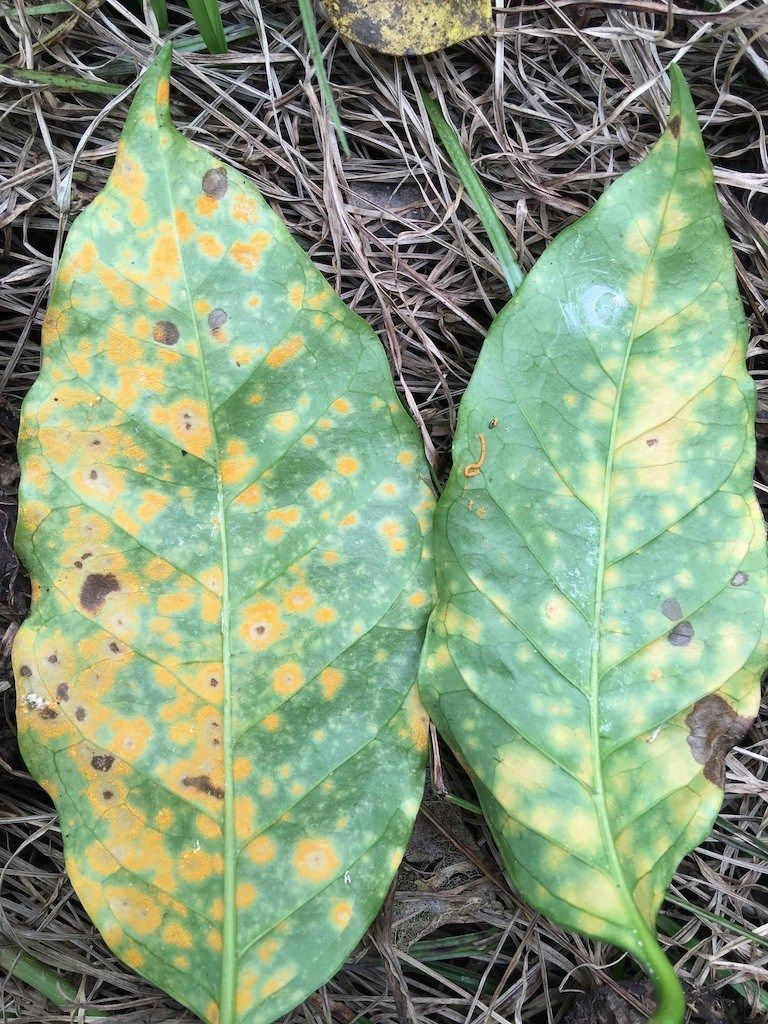 Thus, the team collected coffee leaves contaminated with rust, but this time, some that also harbored mycoparasites L. lecanii.Again, they left each snail with a sheet of coffee in dark containers for 24 hours.

A statistical analysis of the eating habits of snails indicated a significant preference for leaves that contained the rust fungus accompanied by mycoparasites L. lecanii.In addition, snails seemed to consume more rust when the leaves had a greater abundance of mycoparasites.

Hajian-Forooshani explains that many organisms can modify behaviors and the way they express them when faced with a new situation.

"This concept is generally accepted as true due to the spontaneous emergence of pests around the world and the unforeseen interactions between invasive species and biological control agents in ecological communities around the world," says Hajian-Forooshani.

The relationship between coffee rust, garden snails and mycoparasites L. lecanii. may be an example of a phenomenon called “intraguild predation”, in which a predator consumes prey infected with a pathogen. Theoretical research has suggested that intraguild predation may serve to prevent pest outbreaks.

The intraguild interaction can stabilize the mycoparasite population and provide better control or suppression of coffee rust in the long term, says Stacy Philpott, a professor at the University of California at Santa Cruz who specializes in agroecology, biodiversity and biological control of coffee pests.

"This could be an important ecological role played by the snail," says Philpott, who didn’t participate in this study. Her laboratory has witnessed a similar intraguild relationship for the protection of coffee through interactions between ants and two insects that feed on plants: aphids and mealybugs.

Scale insects and aphids feed on coffee leaves. Ants, in turn, collect the sugar excreted by these insects and protect them from other predators. Although the relationship may seem harmful to coffee plants and farmers often confuse these insects with pests, ants are often aggressive with other, more harmful herbivores, and, in the end, their relationship is beneficial to the plant.

The irony of garden snails that provide an agricultural service by eating rust on coffee leaves is that the snail itself is considered a critical agricultural pest, which devastates citrus crops, vineyards, vegetable, cabbage and brown-mustard plantations all over the world. For this reason, among others, the researchers interviewed for this article recommended great caution when exploring the use of invasive snails as a biological pest control agent.

At the moment, little is known about how garden snails can affect the ecosystem. For example, the snail eats mycoparasites along with rust, but what if it consumes a large amount? Could it allow the rust to grow faster and spread to larger areas than before, destabilizing the coffee plantation ecosystem?

"Classic approaches to pest control often fail to consider this complexity, causing major natural disasters," said Estelí Jiménez-Soto, an agroecologist at the University of California at Santa Cruz, who has conducted extensive research on biological control measures and coffee culture. It is also uncertain whether this intraguild predation could be applied as a biological control throughout Puerto Rico or even outside the island.

Hajian-Forooshani says that more field research will be conducted to assess whether the consumption of coffee rust by gastropods is widespread in rural properties on the island and throughout Latin America.

During their last visit to Puerto Rico, the researchers noticed some other slugs, not yet identified, with what appeared to be coffee rust spores inside that also left bright orange droppings. There is a possibility that coffee rust is more widely consumed by gastropods than previously believed and that this phenomenon has simply gone unnoticed by the scientific community until now.

Another important question is whether the rust spores consumed by snails remain viable after being excreted. If spores can survive and spread, snail predation may be of little use to coffee growers (and coffee lovers).

However, if this discovery results in a viable form of biological disease control, it would certainly be welcome. Other rust control methods need to be constantly adjusted to keep up with the fungus' increased resistance to pesticides and fungicides. This is where snails could offer an advantage.

"It would be difficult to develop resistance in return for being eaten," says Hajian-Forooshani.

Gisele and Tereza in the country of green tones

The agricultural productivity and the Mount Everest